Veterans On the March • Memorial Day in D.C.

Posted on May 29, 2017 by georgiapeacejusticecoalition

Veterans On the March!

“War is a racket: A few profit, the many pay!”– Major General Smedley Butler, USMC 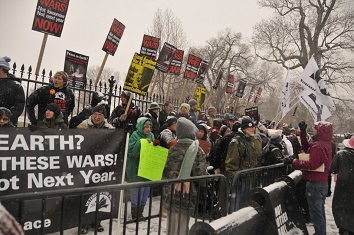 Hundreds of Veterans and allies gather at the White House December, 2010 to demand Peace

In response to President Trump’s outrageous budget proposal, including a $54 billion increase for the Pentagon, VFP and other veterans groups will not be silent. Planning for this was started in response to VFP’s galvanizing statement about Trump’s Military Budget and our desire and responsibility as veterans, citizens and human beings to express our strong resistance to his policies and our commitment to find a better way to peace.

The Trump administration recently fired 59 Tomahawk missiles into Syria, in violation of international and U.S. law. After that, the largest non-nuclear bomb was dropped on Afghanistan, an impoverished country that has suffered enough already. Trump has been making threats towards North Korea that could initiate a nuclear war – WWIII. He says, he will not tell anyone ahead of time what he will do.

Donald Trump and his administration appear to be destroying this planet with utter disregard for our children and grandchildren.

Veterans cannot be silent. On May 29th and 30th Veterans For Peace and other veterans groups will be in Washington, DC, to make our collective veterans’ voices heard loud and clear and we invite you to join us!

On Memorial Day,  Veterans For Peace will gather for a solemn and respectful occasion to deliver letters at the Vietnam Memorial Wall and to remember all combatants and civilians who died in Vietnam and all wars. We will mourn the tragic and preventable loss of life calling for people to abolish war in the name of those who have died and for the sake of all those who live today.

On the 30th we will boldly and loudly demand an end to war, an end to the assault on our planet, an end to abuse and oppression of all people and to stand for peace and justice at home and abroad.

1. Dismantle the U.S. Empire at Home and Abroad

5. Dismantle Corporate Control of our Government

6. Dismantle the School to Prison/Military Pipeline

7. Stop Persecution of Migrants and Immigrants

8. End Sexism and Gender Discrimination in the Military 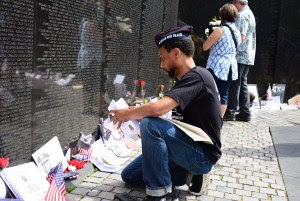 Monday, May 29: Meeting at 9 AM at the Bell Tower, adjacent to the Wall for a briefing by Doug Rawlings and an opportunity to read some of this year’s letters; 10:30 AM, we deliver letters to The Wall; from 11:30 to 12 we proceed ½ mile to MLK Memorial; at 12:30 we begin a public reading of MLK’s Riverside Church address, his Beyond Vietnam speech. After the MLK event we gather back at the Bell Tower to engage with the public. At 6:30 PM we meet for a social gathering at Busboys & Poets.

Tuesday: May 30: 11 AM rally at Lincoln Memorial w/hour of short, uplifting speeches, then after the rally VFP will be going to the White House fence to demand our meeting with the president. We will read the letter from VFP President Barry Ladendorf asking for a public meeting, which will have been sent previously to the White House.

We will have legal support and musical accompaniment.

To RSVP for the event, please fill out this form.

Housing in the DC area: http://washingtonpeacecenter.org/masshousing

For more information on the Letters to the Wall project contact Doug Rawlings,  rawlings@maine.edu, 207 500-0193 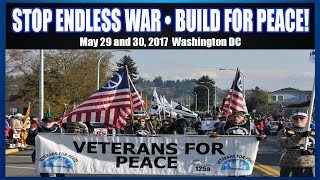